Adult Choir “There’s Something About That Name” Listen Here

This time-honored chorus from Bill and Gloria Gaither is set here as a reverent, meditative ballad.  The middle section includes an original melody paired with John Newton’s great hymn text “How Sweet the Name of Jesus Sounds.”

playpause
- /
Update RequiredTo play the media you will need to either update your browser to a recent version or update your Flash plugin.

playpause
- /
Update RequiredTo play the media you will need to either update your browser to a recent version or update your Flash plugin.

From Dusk to Dawn tells the story of the Liberian women protesting the civil war which engulfed their country until 2003. Led by Leymah Gbowee (Winner of the 2011 Nobel Peace Prize), the women prayed, marched, sang and resolutely waited for peace. Their “uniforms” were white T-shirts. 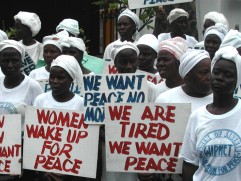 At times, the women doubted their strength. But, with hands joined together, they became peace mothers. Ultimately, they proclaimed, “Mighty be our powers!”

The musical language for this choral setting is rhythmic, energetic and powerful. The voices sing, “Gather, gather,” in repeated 8th notes, as the calls for protest gain in strength. Tremolo chords in the accompaniment bring increased energy. The final section is emphatic, with accented chords in the voices and piano to express “Mighty women!”

Notes by the composer – Gwyneth Walker