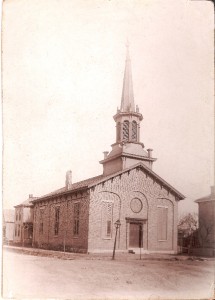 The following is a history taken from William James McMurray’s 1923 History of Auglaize County Volume 2. The next history is by Pastor R. Morris Smith (1932).

In 1859 the matter of erecting a church edifice was considered and favorably acted upon. A building committee consisting of John Shawber, J. H. Sifert and Joshua Shawber was appointed and immediate steps were taken to erect the building at the earliest practical moment. This was in April 1859. In the following June the congregation suffered a great loss in the death of their beloved pastor, the Rev A. P. Hills. However, they continued faithful and completed the structure, a substantial brick building on the corner of Blackhoof and Mechanic streets, the site of the present handsome church edifice, in January, 1860. On the 28th of that month the first sermon was preached in the new church by the Rev. W. H. Wynn, who subsequently became a noted educator and scientist. The building was formally dedicated on January 31,1860, by the Rev. Dr. F. W. Conrad, then of Springfield, Ohio, assisted by the Rev. W. H. Wynn and the Rev. J. W. Goodlin. The last named, who was a very able and popular preacher, served as pastor of the church from April 1,1860, to April 1, 1861, when he was succeeded by the Rev. W. C. Barnett, who retained the pastorate until 1865, thus serving during the troublesome Civil war period. It was during this pastorate that dissatisfaction and trouble arose in the congregation over the attitude manifested by the pastor in his consideration of the problems of the war, many declaring his sympathies were with the South. He was asked to resign and this he finally did, determining in the meantime to organize another congregation. This was done and a few families of the church followed their pastor and became members of the new congregation. They bought a lot and commenced the erection of what is now St. Mark’s church on West Auglaize street, but before the building was quite completed they decided to abandon the enterprise. As a result the pastor obtained a charge elsewhere and the members returned to the mother church. The Rev. D. W. Smith succeeded Mr. Barnett and he proved to be a most successful pastor and very influential and popular in the community. One of the most successful pastors this church ever has had was the Rev. Ross Stover, who became known far and wide as a singer and director of choruses. He resigned to accept the pastorate of Messiah Lutheran church of Philadelphia. The Rev. Ernest Zimmerman is the present pastor of the English Evangelical Lutheran church.

The following is the beginning of a history by Pastor Morris Smith who served First English Lutheran Church from 1927-1935, just prior to Pastor George Weissling. He wrote this for the 75th Anniversary.

The task of compiling the 75 years’ history of this congregation was not an easy one. If any errors are here recorded, such will be due mainly to insufficient data, inasmuch as nearly all pastors failed to chronicle any events of importance. The source of information, consequently, lay entirely in the minutes. Whilst these have been fairly well-kept, much material and material of historical importance, undoubtedly perished with the decease of members during these long years. I shall, therefore, vouch only for the fidelity with which I searched the records and the correctness of transcripts taken from them.

On December 25th, l857, what is now known as THE FIRST ENGLISH LUTHERN CHURCH, was organized. This organization was effected in what was then the M.E.Church and assumed the name “FirstEnglishEvangelicalLutheranChurch.”

From a record kept by the Rev. A.F. Hills, the first and organizing pastor, he informs us that “he commenced preaching in the town of Wapakoneta, Ohio, in the month of October, 1857.” His text in the morning of October 4th was Deuteronomy 6:5 – “And thou shalt love the Lord thy God with all thine heart and with all thy soul, and with all thy might.” He also preached in the evening from Isaiah 28:16. At that time he was living at Crestline, Ohio, and evidently did not minister again to the people here until November lst, preaching twice on that day and again twice on November 22nd, once on November 29th, and then regularly on Lord’s Days beginning on December 6th. He also preached on Thursday, December 24th, in all probability as a preparation for the Church’s organization the next day, Friday, December 25th. The Preamble to the Constitution adopted that day reads as follows: “Whereas due notice having been given, a number of members of the Evangelical Lutheran Church whose names are hereto subscribed, having assembled in Convention on the 25th day of December, 1857 A.D. in the M.E. Church, in Wapakoneta, Auglaize County, Ohio, and inasmuch as a Church organization in which all its members are brought under the same rules or order and government is considered necessary in the successful promotion of the Redeemer’s cause; therefore

RESOLVED, that we form ourselves into an individual Church and adopt the following Constitution as rules for our government:”

NAME. The first Article of this Constitution reads as follows, “This church shall be called the English Evangelical Lutheran Church of Wapakoneta, Ohio, and shall be composed of all whose names are here subscribed to this Constitution and who shall hereafter be received by a vote of the Council and according to the usages of our church.”

Ten persons formed the nucleus of this infant organization. They were;

With this roster of names the EnglishEvangelicalLutheranChurch started on its career. Before pursuing this history any farther, let us stop here a moment and ask, “What was Wapakoneta like 75 years ago?” The answer is easy as we need only to quote from a letter in our possession and written in March 1859 to the LUTHERAN OBSERVER by the pastor. He writes, “Only about 25 years have passed since the Redmen vacated these grounds. The town contains over 1000 inhabitants.We now have four dry goods establishments, two drug and two clothing stores, one tin and stove store, one shoe store, a furniture room and a number of groceries; also three hotels, a good Court House and a jail.In Church improvements we have not made much progress. The Roman Catholics have erected a large and expensive Church. The M.E.Church has a small building. The Presbyterians have an organized congregation but no church building. The German Lutherans have an organized congregation and a small church building which affords them a comfortable place for worship. The English Lutheran congregation is as large as any of the Protestant denominations in the place. They have no church but are now engaged in erecting a brick structure for that purpose, 38 x 56 on the ground, 18ft. in the story, surmounted by a steeple, and is to be finished in a plain yet neat and substantial manner. There is sufficient money and work subscribed to insure the speedy completion of the building leaving the congregation but little in debt.”

Now what of the Church life of those early days? Rev. A.F. Hills does not leave us in the dark. Writing to a friend under date of January 17th, 1859, he says: “The MethodistChurch is in a low state. They sometimes speak of abandoning their work here. The Presbyterians are also in a cold and low condition. The Lutheran congregation which I organized one year ago last Christmas still holds its own.”

In addressing a letter to the Executive Committee of the Home Missionary Society applying for financial aid and dated January 18, 1859, Rev. Hills embodies the following data: “The Roman Catholic is much the strongest religious denomination in the county. They are now finishing a very expensive Church in our town. The Presbyterians have occasional preaching. They have no regularly organized congregation, but have some 10 or 12 members in and around town. The Methodists say they have 8 regular communing members. They are not effecting much and talk some of abandoning the field. There is also a German Lutheran Congregation in the place numbering they say about 20 members.” We organized with 10 members one year ago last Christmas, since which there have been 11 accessions. We are now undertaking to build a Church. We have very nearly $2,000 subscribed and have contracted for nearly all the requisite materials and design putting up the wall early in the spring.”

In April 1859, a building Committee consisting of Joshua Shawber, J. H. Sibert and John Shawber was appointed and steps were immediately taken toward the erection of a Church. However, before Rev. Hills saw the fruition of his hopes and the success of his labors, even before the roof covered this infant church-building, he was called, in June 1859, to the Church Triumphant in heaven. His pastorate consequently was brief in its duration-almost 1 year and 3 months and 12 days.

The Church building was completed during the summer and fall months and on January 28th, l869, the first sermon was preached in the new structure by the Rev. W.H. Wynn. Three days later, January 31, 1860, the Church was formally dedicated by the Rev. W.F. Conrad of Springfield, Ohio, assisted by the Rev. W.H. Wynn and J.W. Goodlin. The building and ground cost about $3,000. On the day of dedication an offering of $316 was secured, this being sufficient to liquidate the entire building debt. In this connection it is but just and right to take cognizance of the unretiring devotion, unselfish efforts, and consecrated labors of John Shawber, one of the charter members. Though not wealthy he subscribed and paid far beyond his means and supported the Church in every worthy project. Pity ‘tis that such a devoted and conscientious Churchman should end the last years of his life in the Logan County Home, even though this happened by his own express desire.

I have here to register my disappointment in not having been able to find the date of the corner-stone laying of the FirstChurch, if such a ceremony took place.